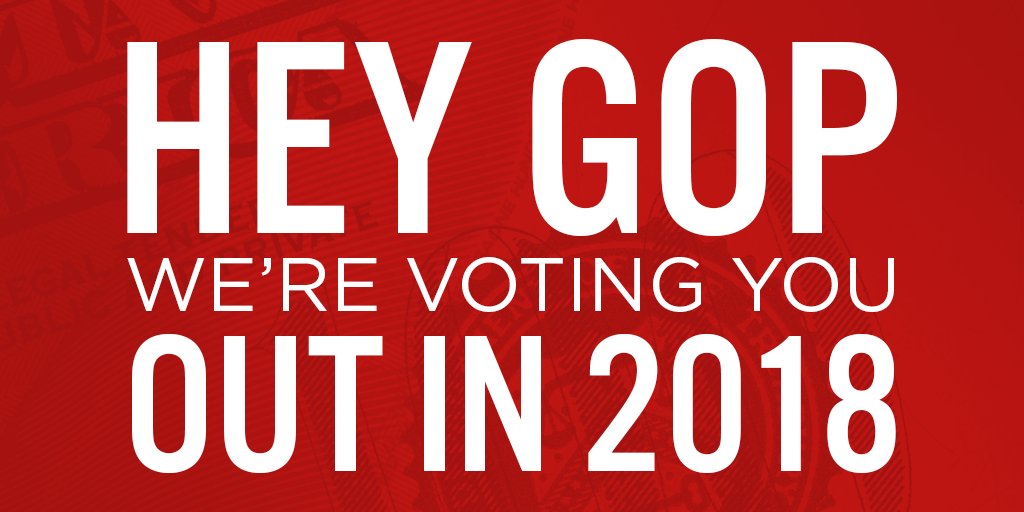 WHERE?-The meetings were in a small conference room next door to the historic Majestic Theater in Eastland, Texas. There was seating for about 30 people, but these seats were quickly filled, and it was standing-room-only for about 100 enthusiastic attendees. Also, there were a few people gathered just outside the doors, trying to listen in.

Despite the best efforts of the a/c, after about an hour it became a little warm in the room. But this did not quell the enthusiasm of the crowd. The organizers of the event did a great job and I suspect they were pleasantly surprised by the size of the crowd.

Ms. Jennie Lou Leeder was the first candidate to speak and she represented herself well. She has a strong agricultural background and has been a leader in Texas politics most of her adult life.

Jennie Lou holds an undergraduate degree from Southwest Texas State and has a Master of Science Degree in Athletic Administration from Ohio University. She is clearly someone who will serve the people of Texas well and will stand up for the rights of “We-The-People”, not the super PAC’s, large corporations or a few ultra-wealthy people.

Not only does she have a strong agricultural background but is a deeply-experienced educator as well. She wants to improve the Texas educational system and will push for increased Federal funding to reduce the tax burden on local and state taxes. She believes that new and refurbished school facilities should be considered as a part of the upcoming Federal infrastructure spending bill.

She advocates single payer health care; no person in the U.S. should have to choose between feeding a family and receiving medical care. She is pro-care womb-to-tomb and agrees that all women should have autonomy regarding their healthcare choices. She is a firm proponent of women’s rights in all matters. 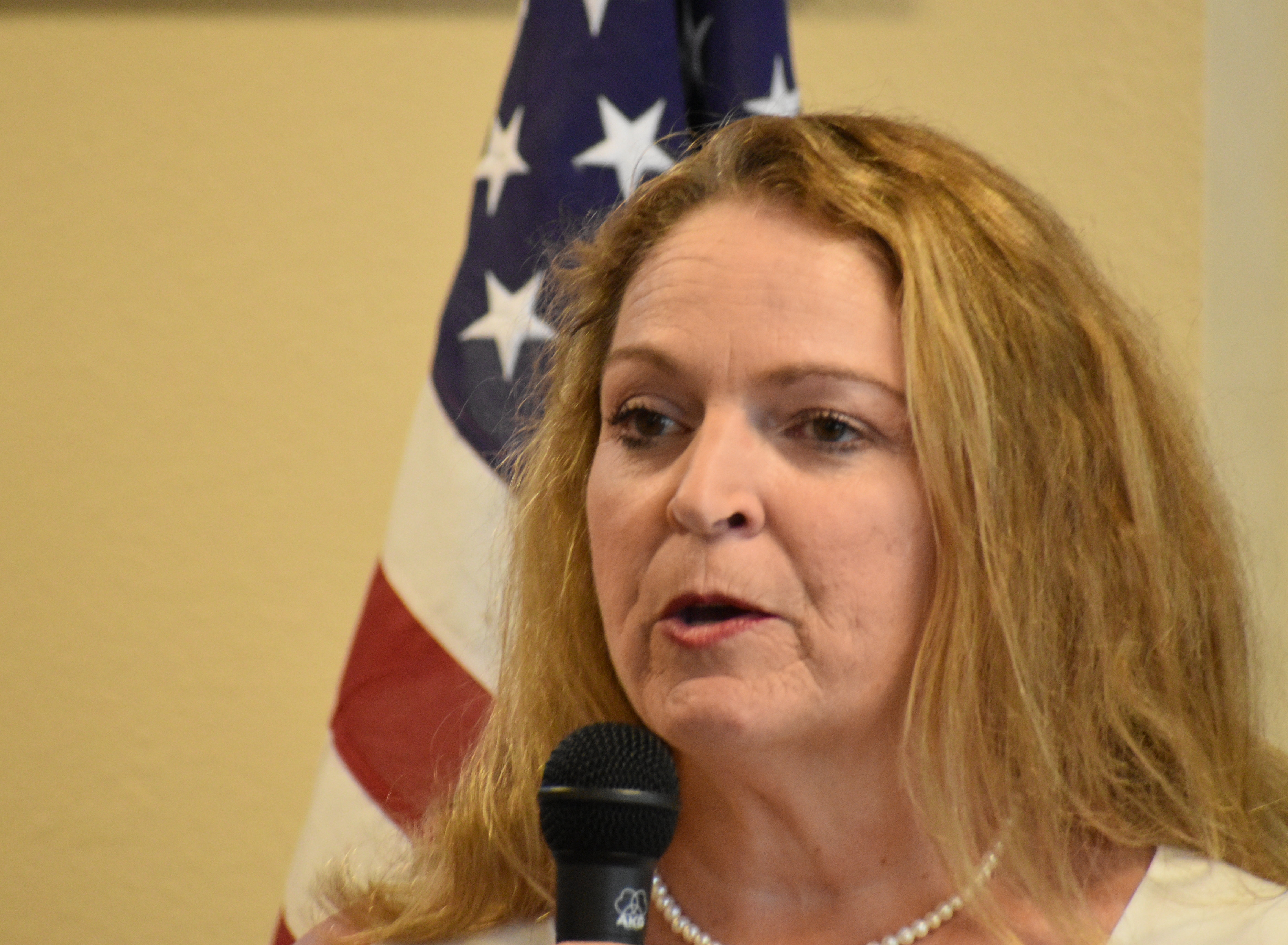 Ms. Leeder supports common sense gun regulation, from closing the infamous gun show loophole to making it illegal to sell or possess automatic weapons or bump stocks. She expresses no desire to take guns away from the people of the U.S., only to see them under common-sense regulation, similar to motor vehicles.

Mr. Conaway’s ill-conceived SNAP proposal drew her special fire. The idea of imposing work or educational requirements on SNAP recipients is absurd. Almost all adult recipients already have a job, and those that don’t are elderly, disabled, or children. The only people truly affected by this would be those in rural areas that haven’t the locally-available jobs or trade schools to permit them to satisfy the requirements. They are the people who need the SNAP program the most. Reducing benefits to recipients while adding $7.7 billion in annual bureaucratic costs to manage the work/education program (CBO estimate) is nonsensical.

Ms. Leeder used an example of a working mother of two who is employed by a fast food restaurant and earning $7.25 an hour. One of the woman’s children gets sick. The working-poor mother is now faced with additional medical expenses and is unable to work because the daycare won’t take a sick child. She must stay home take care of him herself. The proposed changes would make her ineligible for SNAP and without SNAP the mother is no longer able to feed her children. Mr. Conaway’s programs would hurt hundreds of thousands of families. 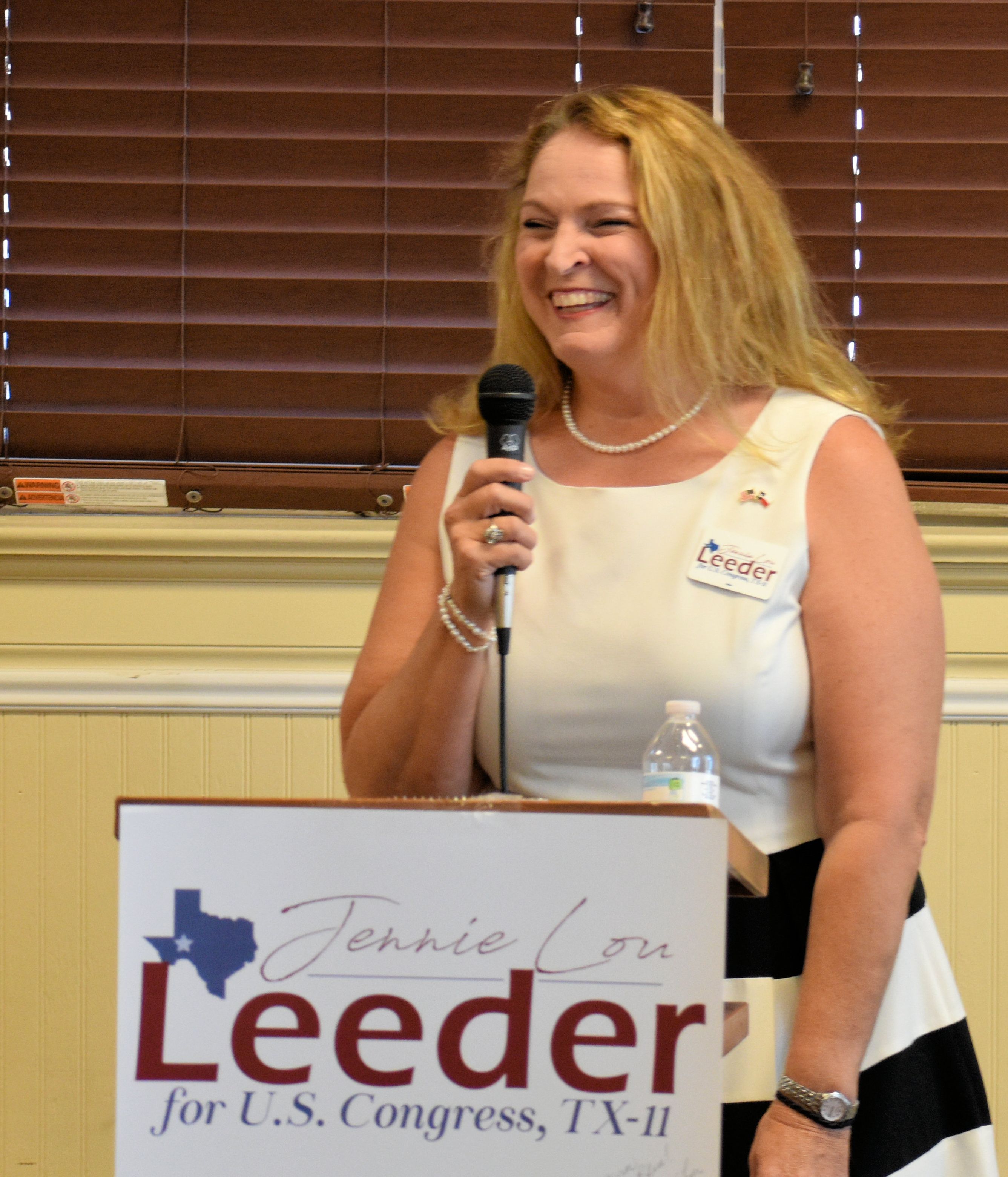 In order to address such injustices, Ms. Leeder stressed the importance of political involvement of the citizens of a democracy. Citizens must be involved politically to ensure their elected representatives do their jobs of governing FOR the people. Absence of that involvement will lead to the kind of corruption that we see in the highest levels of our government today. 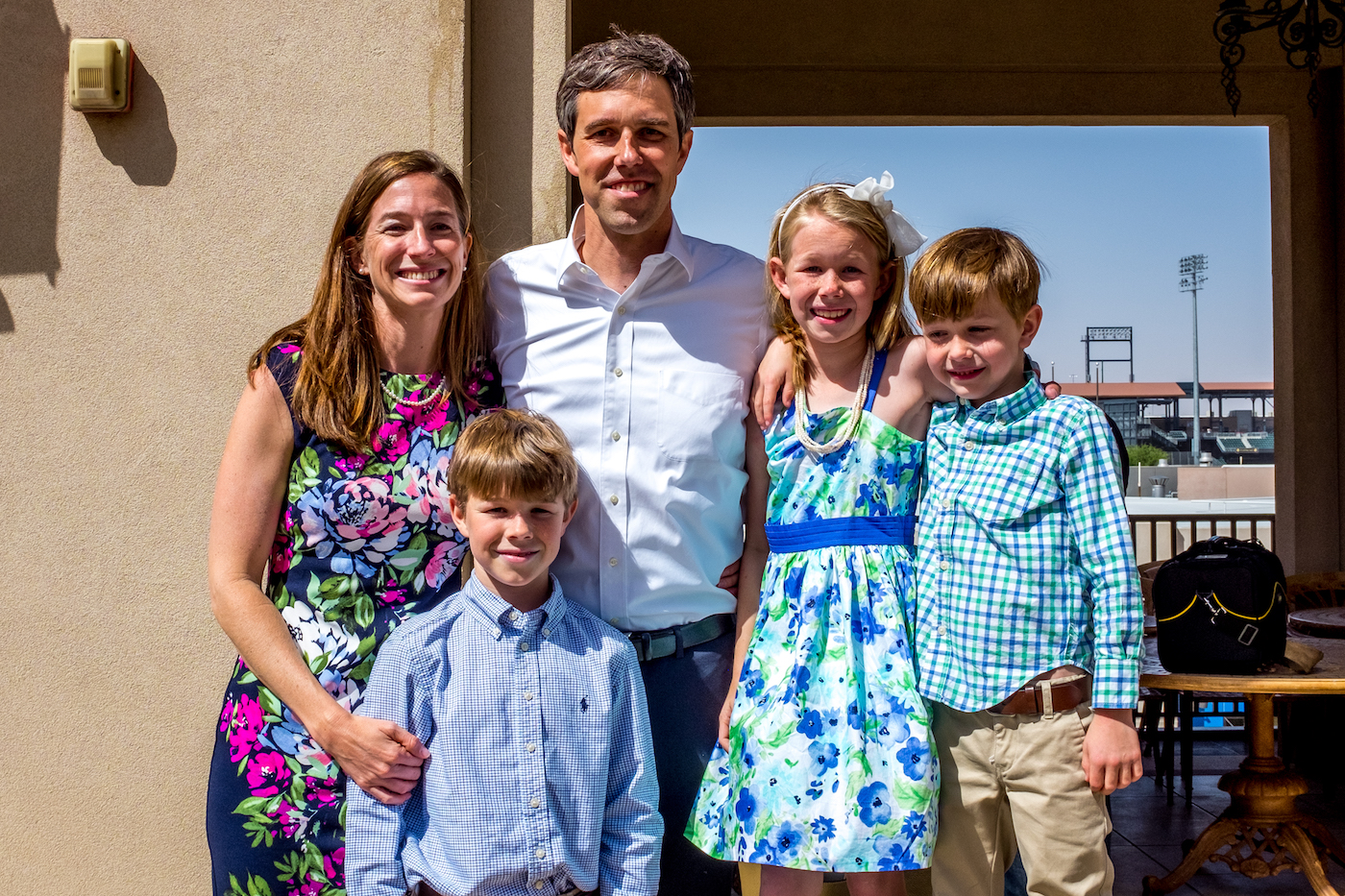 Beto O’Rourke arrived at the meeting just as Ms. Leeder was concluding her portion of the meeting. Congressman O’Rourke reminds me of a combination of Jimmy Stewart in the movie “Mr. Smith Goes to Washington” and the late Bobby Kennedy. He was well received by the people at the meeting despite the increasingly warm conditions of the crowded room. Beto founded a successful business in El Paso that has allowed him to pursue an extremely promising political career. He was first elected to the U.S. House of Representatives in 2012. **He is currently serving on both the House Armed Services Committee and the House Committee on Veterans’ Affairs. **

Prior to Mr. O’Rourke’s arrival in Eastland he started his day at about 6 AM where he literally conducted a “running” town hall meeting in Killeen, Texas. He answered questions while jogging and his audience jogged along with him. After completing this running town hall he proceeded to Temple, Texas where he spent a few hours knocking on doors, introducing himself to the residents of Temple. He held a brief town hall meeting at the Scott and White Park in Temple. Mr. O’Rourke then traveled to Waco, Texas where he knocked on more doors before heading to Eastland, Texas, arriving here about 3:30 PM.

Beto spoke to the crowd in Eastland for about 40 minutes. He is a dedicated family man but also wants to serve his country with the support of his wife and children. Sometime during this busy day he found time to call his family. His son was participating in a basketball camp and during his son’s first game he learned that he’d just scored. He readily admitted that he really missed being there for the game but realizes that he has a greater duty to serve the people of Texas. 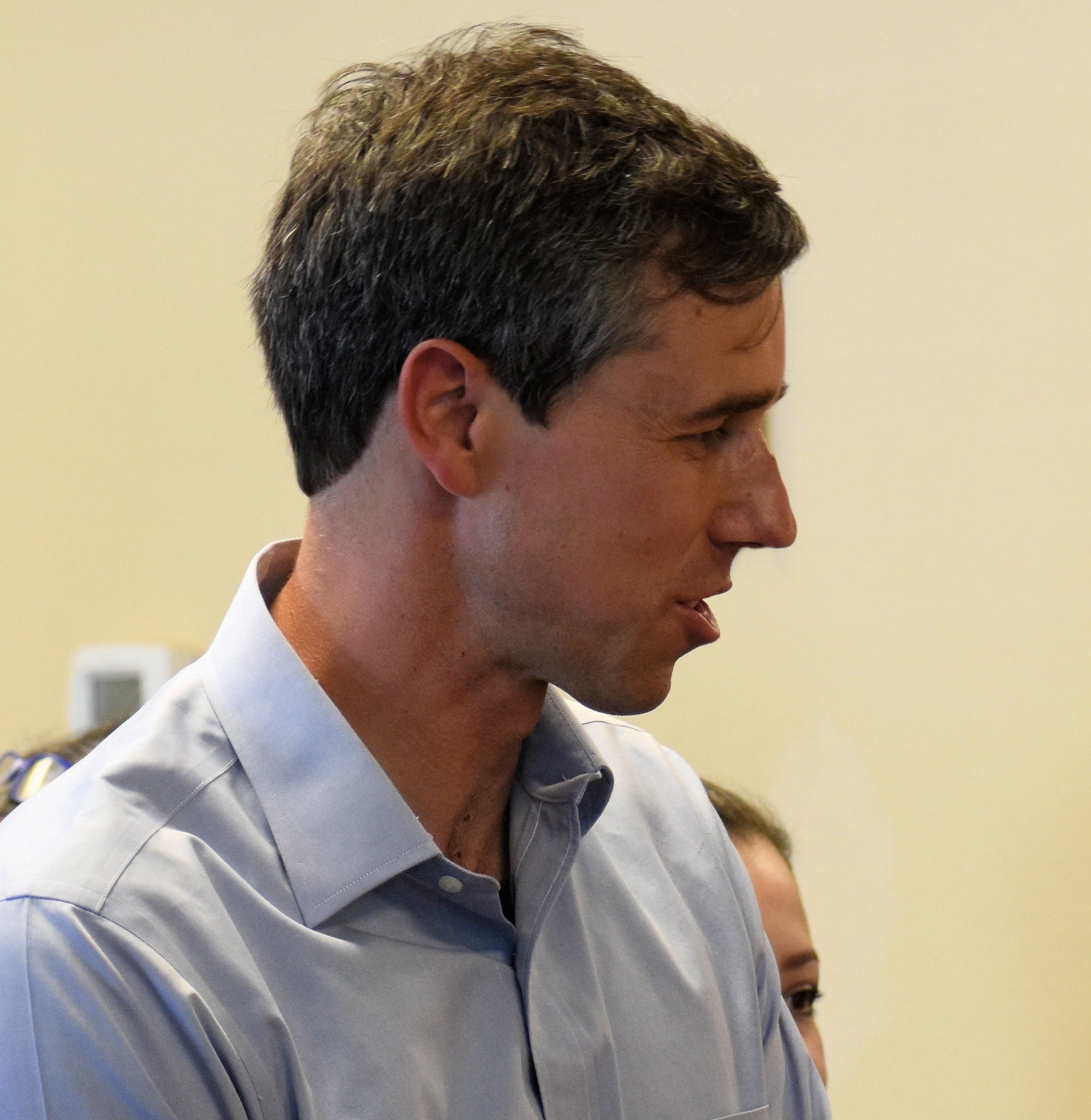 Issues-Mr. O’Rourke then continued speaking of the issues he intends to pursue in his future political career. The first issue he addressed had to do with school safety and ensuring that his children and the other children of this nation have a safe school to attend, without fear of being murdered by a deranged individual with a semi-automatic weapon.

He’s from El Paso and is aware of the need for immigrant workers to fill the jobs that U.S. citizens will not perform. During his recent travels in cotton producing sections of the state he learned that it is difficult to hire people to perform the manual labor in cotton gins. He stressed the importance of establishing workable immigration laws that recognize the need for migrant workers in the agriculture and construction industries.

He addressed the urgent need for the people of the United States to regain control of their government and wrest it from the hands of the wealthy, their PAC’s and the giant corporations. It is necessary for all citizens to take an active role in ensuring that the government is run by the people and for the people. He believes in campaigning in a way that takes his beliefs right to the average citizen. He does this by face-to-face campaigning; meeting and talking with as many people as possible every day. He refuses to accept money from large corporations, PACS and ultra-wealthy individuals.

Immediately after concluding the town hall in Eastland the O’Rourke group headed to Abilene, Texas where he had a 6:00 town hall meeting scheduled. I checked his web page that evening and it looked like he had a group of at least 200 people in attendance. Early on the morning of May 13, 2018 Beto departed Abilene on the way to the Panhandle of Texas as he continues his marathon campaign in which he hopes to visit all 254 counties of Texas. 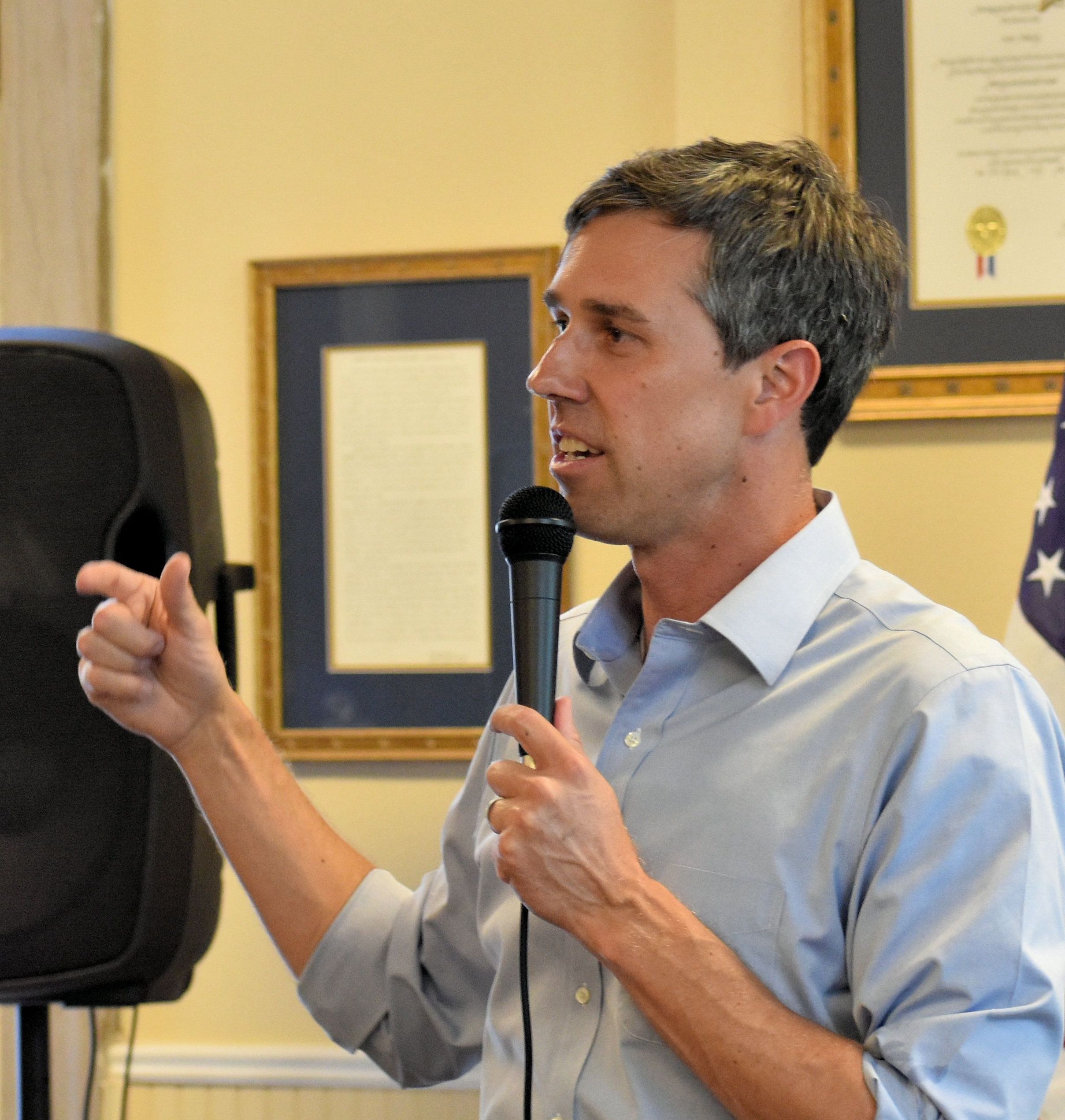 It is very encouraging to witness and in a small way be a part of the resurgence of our Constitutional government; of, by and for the people. Ms. Leeder and Representative O’Rourke represent the finest of their generation and I know they will assist in eliminating the stain of corruption that is enveloping our great nation, especially at the highest level.

For these two fine young people to be successful, we the people must do our part by participating in the government as much as possible. We must be informing our leaders of our needs and insisting that they perform in an honorable and effective manner. Elections are coming up in November and the people of Texas need to speak loudly through their votes. Encourage your friends, relatives and neighbors to register to vote, volunteer on campaigns, contribute even small sums to their candidates, and then fulfill their duty by voting.

Our Thanks to Steve Green for his reporting and meeting photos